Dr. Eldridge, Dean of the School of Education Ministries at SWBTS, was in touch with the leadership training needs of churches as a frequent church training and leadership conference speaker. Dr. Waller was the Dean of Distance Education at SWBTS, directing all online programs and extension centers. He knew firsthand the potential of online learning. Dr. Simmons was director of the Southern California Campus (Orange County) of GGBTS, which included an extension center at nearby Saddleback Church. Simmons, an expert in non-traditional seminary students, had researched extensively the challenge of reengineering seminary education.

These men recognized trends among Evangelical churches, with corroboration from decades of 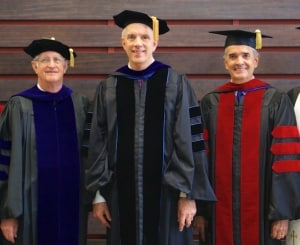 published literature that called for change within seminary education. At the same time, they became increasingly concerned that traditional seminaries were either unwilling or unable to make the changes that were needed. Their concerns were reflected, for example, in the Christianity Today article “Re-engineering the Seminary?” (1994) that described a “velvet revolution sweeping through the nation’s seminaries.” The need for a new approach to seminary education was best captured in a study commissioned by seven evangelical seminaries in 1993: “Standing on the Banks of Tomorrow: A Study of Ministry Needs of the Local Church for the 21st Century.”

In anticipation of the possible launch of a new school to address these concerns and possibly reengineer ministry training, the Compton Institute for Christian Leadership had already been established.

During 2003, “what-if” discussions about online learning design, ministry-focused academic programs, and relevant curriculum gradually evolved into serious planning and preparation for the launch of a new kind of seminary. The decision was made to start the new school in Springfield, Missouri, the hometown of Dr. Eldridge. The same year, the school’s name was changed to Rockbridge University.  Dr. Rick Warren, senior pastor of Saddleback Church and well-known author, gave his public endorsement of the school’s online learning that features a curriculum designed around the five biblical purposes of the church. The school launched with two programs: Master of Ministry Leadership and Diploma in Ministry Leadership. Each program consisted of 39 credit hours of courses that were designed to shape servant leaders for Christian ministry.

In August of 2003, Dr. Eldridge resigned from SWBTS (located in Ft. Worth, Texas), moved to Springfield, Missouri, and accepted a staff position at Second Baptist Church, which graciously provided office space for the new school at no charge.

Using personal funds and funds gathered from family and friends, the founders prepared to receive applications and develop courses. Dr. Simmons resigned from GGBTS at the end of 2003 and became the first full-time employee, teaching the inaugural course in January 2004 to 12 students. Dr. Eldridge joined the seminary full-time in 2005. Also in 2005, the institution’s name was changed to Rockbridge Seminary. The final cofounder to join the seminary full-time, Dr. Waller, retired from SWBTS in 2006. Dr. Waller left his administrative position in 2010, but continued as a faculty member.

In 2007, the seminary began offering a Master of Divinity (M.Div.).  Rockbridge received initial accreditation from The Distance Education Accrediting Commission (DEAC) in June 14, 2013. In 2014, the Doctor of Ministry (D.Min.) was added to the curriculum.  The seminary was reaccredited by DEAC in 2016 and the school is up for accreditation renewal in 2021. 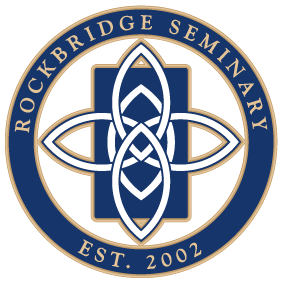